Learning together, inspiring each other

What have we been up to recently?

A glorious sunny day greeted us for Sports Day this year. It was wonderful to see so many parents, carers and family members coming to cheer on their children in all twenty events!

Each House was split into five teams with a mix of children from Reception to Year 6 in each; the perfect opportunity to demonstrate our motto or learning together, inspiring each other!

Once all of the points had been totalled it was very close at the top with only 37 points between first and second place.

Summer 2022 will see the Commonwealth Games come to Birmingham.  The leadership team at Coldean Primary School were inspired by the Queen's Baton Relay that aimed to spread a message of hope and collaboration on the run up to the games.

Coldean Primary School organised a School Baton Relay that will visit every school in the city on the run up to the Commonwealth Games.  The baton left Coldean on 8th March and will come back on 7th July after it has visited all 68 schools in the city.

The children at Coldean designed the baton and ensured it represented elements of the city they felt were important.  A local artist then turned the children's designs into a 3D baton (made out of brass)

After warming up we took the baton on the first leg of its epic journey to BACA.

When passing on the baton every school has been asked to share a message of hope too.  We used the old Ian Drury song 'Reasons To Be Cheerful, Part 3' as our inspiration.

Mr Wilson took along two of our pupils to this event that celebrates all school achievements supporting young people to live a healthy lifestyle through delivering sport and physical activity, mental health programmes, and offering nutritious food.

In recognition of our commitment to leading active lives, Coldean was awarded both the School Games Platinum Award and the Blue Healthy Choice Award. The Platinum Award is of particular note as few schools have achieved such a high level of PE & Sports provision. 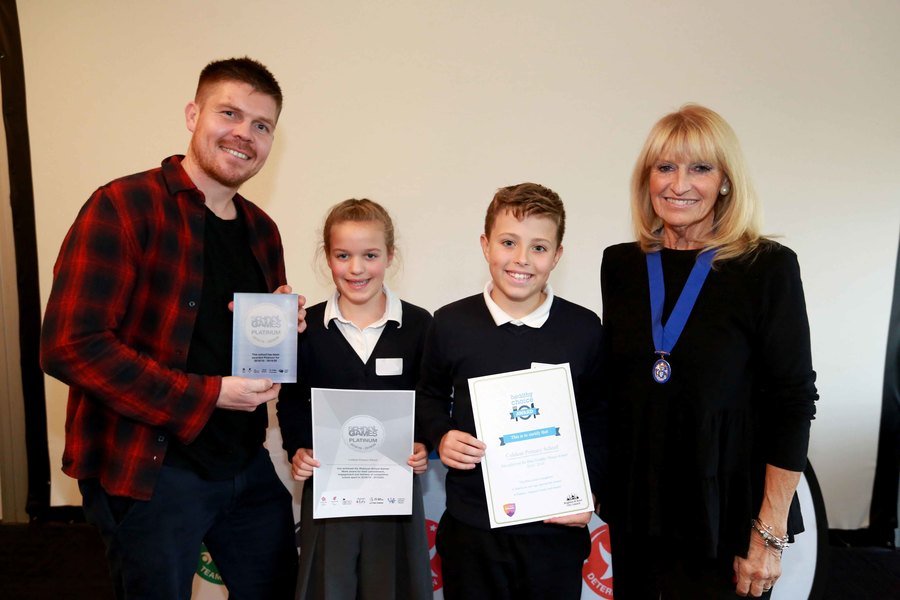 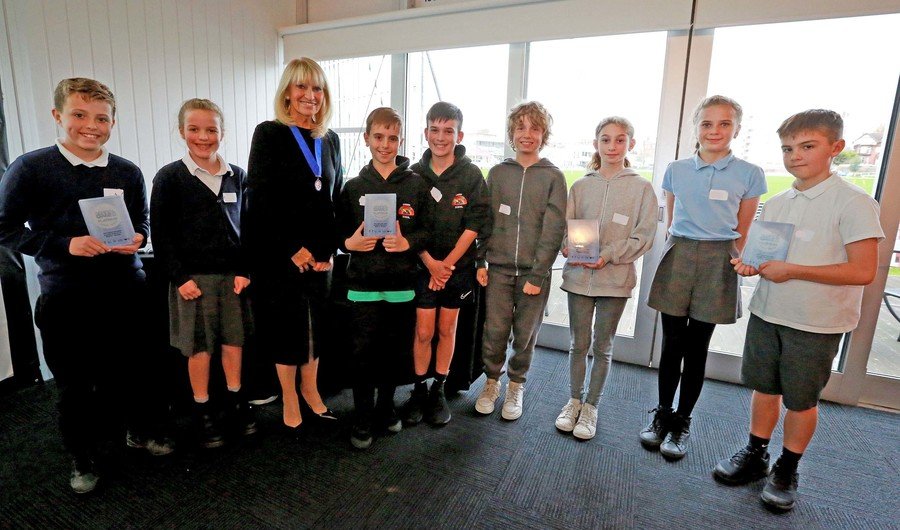 The end of another wonderful year at Coldean Primary School. In addition to our Sports Awards Evening, we also celebrated the children who achieved one of our academic awards. This year saw the introduction of awards for some of our Key Stage 1 pupils who have made progress, achieved highly or show great promise for future achievement.

Year 5s headed out to Bowles for three days of team-building activities and the chance to face the challenge of dry-slope skiing, rock climbing, raft building, archery and scrambling at Harrison's Rocks! Such a great start to the year!

Year 6s enjoyed their trip to Bowles to try out lots of new activities and face new challenges.

They orienteered round Hornshurst Woods, abseiled down the Bowles rocks, negotiated the low ropes course, zip-lined and ended the three day with a day on the lake. There they kayaked, paddled canoes and even built a raft and raced each other! Fabulous memories to take with them as their time at Coldean ends.

Lorraine Bowen popped into school to do a workshop with a class of children on song writing.  A fabulous time was had by all!

We finished our year with our wonderful Awards Assembly, where we celebrated excellence in academic achievement and demonstration of skills and values that we hold dear.

At the end of April our Year 6s attended the Safety in Action course at Sussex County Cricket ground in Hove.

This event is run to equip pupils about to go to secondary school, with an awareness of how to minimise risks they may encounter as they enjoy greater freedom as they get older.  Our pupils took part in up to 12 activities focussed on highlighting particular situations. Over 300 Year 6 pupils from across the city took part this year ... and Coldean pupils scored the most points of any school!

Nigel Cusack, Brighton & Hove Borough Commander of East Sussex Fire and Rescue Service came to award them with a certificate to celebrate this wonderful achievement. In addition, Vanessa Potter from Sussex Cricket Ltd dropped by with another prize as did Richard Lintott from Brighton Lions who gave the school a cheque for £250!  School Council will be debating how best to spend this at the next meeting.

Congratulations Year 6 on being the best in the city!

Year 5 headed down to Hove Lawns and the beach for a full day of Surf Life Saving in the glorious June sunshine.

They were introduced to the fundamentals of being a Beach Lifeguard and Surf Life Saving as an exciting sport. They learned basic lifeguarding skills such as the meaning of flags on a beach, use of a rescue board, rescue tube and sea swimming. Time was also spent dry-side on CPR and first aid ensuring everyone knew the core skills to save a life!

They were presented with the key manifesto promises and given the opportunity to cast their vote. Our Y6 Returning Officers, who ensured the smooth running of the vote and the security of the Ballot Box, made the announcement in our Golden Assembly.

In an interesting mirroring of the results of Brighton & Hove's three constituencies, the children's ballot results were as follows:

As a prelude to this year's Sports Day, pupils in Key Stage 2 created their own sporting games and activities using a variety of P.E. equipment. They then taught pupils in Reception and Key Stage 1 how to play the games, encouraging our values of resilience and pride.

Staff were particularly proud of the Junior children's teaching skills and the encouragement they gave to their young students. It was a truly wonderful example of our school motto of Learning together, Inspiring each other.

Emerald and Jade Classes travelled to the historic Chiddingstone Castle in Kent; a museum filled with exotic treasures and most importantly for Year 4, a dazzling array of artefacts from ancient Egypt. The children were able to investigate and apply their historical enquiry skills and engage in a variety of learning activities to broaden their understanding of life in Egypt thousands of years ago.

Year 2’s Amber and Coral Classes explored the rockpools at Saltdean as part of their Beautiful Briny topic. Supported by staff from Sussex Wildlife Trust, they delved into the strandline dropped by the sea discovering a diverse range of life such as sea squirts, anemones, algae, whelks, crabs, egg cases galore and more. They learned how they are suited to life in this ever changing environment and what eats what!

Indigo and Amethyst Classes travelled to London's Science Museum in March to experience its huge array of interactive exhibits. This was a wonderful chance for them to extend their knowledge and understanding of the key scientific concepts learned in Year 6 through enactive and collaborative approaches.

Christmas celebrations began in earnest with all of our EYFS and Key Stage 1 pupils performing in this year's Nativity, "Lights, Camels, Action!"

Each dance was evaluated by our three wonderful judges, Caesar, the Donkey and the Innkeeper's Wife and the audience joined in the fun with appropriate boos and cheers! A special thanks to Zoe Ball for recording voice-overs for us to add a little bit of Strictly glamour to the proceedings. The audience's verdict was definitely a "Ten from them"!

Every Key Stage 2 pupil performed in "Jeremiah and the Dark Woods"; a production based on the book by Janet and Allan Ahlberg.

After the tarts that Grandma has baked are stolen, Jeremiah, ably supported by the wise-cracking Bo Peep, set off into the Dark Woods to find the no-good robber! On the journey they meet a whole host of fairytale characters, most of whom are only too pleased to tell us a joke.

Our main cast gave amazing performances as did each class scene. Another superb Coldean Christmas show proving what a talented bunch of singers, dancers and actors we have at the school.

As part of their Superheroes topic, Year 5 travelled to Shoreham to visit the Royal National Lifeboat Institute's station and meet the real-life heroes that work there. They were shown the ropes, quite literally, and learned about the amazing work that this charity does in rescuing those in peril at sea.

Year 3 travelled to Fishbourne to investigate life in Roman times and explore the archaeological remains for the palace there. The children particularly enjoyed the workshops that allowed them a real insight into life in Roman Britain nearly 2000 years ago.

Staff from one of our local secondary schools came to deliver computing workshops to develop pupils' coding skills still further.

Coldean was presented with a defibrillator by the Connor Saunders Foundation. Staff received training to use it and Junior children were taught some basic first aid including how to administer CPR.

Year 4 were quick off the mark with an educational visit to inspire the children's learning about Anglo-Saxon Britain. This unique experimental archaeological site nestled in the rolling South Downs National Park was a fascinating day. The farm displays ongoing constructions of ancient buildings based on real sites, dating from the Stone Age through the Iron Age and Roman Britain, and finishing with the Anglo-Saxons. The children loved getting their hands dirty with wattling, daubing and clunching!

Twenty-six pupils who achieved 100% attendance for the academic year had a special reward for their valiant efforts in ensuring that they came to school every single day since September 2015. They set off on the coach with a packed lunch and no idea where they were heading! Anticipation culminated upon arrival at Legoland. The pupils had a fantastic day and their impeccable behaviour was commented on by many members of the public.

Paralympian long jumper Ryan Raghoo was this year’s honoured guest at Coldean’s annual Sports Awards Ceremony. Ryan, a qualifier for Rio 2016, gave an inspirational speech describing how his resilience and dreams of Olympic competition had helped him overcome incredible barriers and driven him to sporting success.
This was followed by pupils receiving an abundance of medals for representing the school at matches and tournaments for football, netball, cycling, hockey, cricket, golf, tennis and athletics. There were also medals for pupils’ participation in the “Change for Life” programme and other after-school clubs.
Special trophies were presented to many pupils for their improvement, commitment or sportspersonship, including Sports Leaders awards for some KS2 pupils who have been teaching sports skills to our younger pupils.
This year a new award was commissioned in memory of Gary Dunk who did so much for children's sport in Coldean. It was presented by his son to our outstanding sportsperson of the year.
A wonderful evening of celebration organised brilliantly by Mr Wilson and Mrs Hughes and hosted once again by our colleagues at the University of Brighton.

Some of the Year 6s ventured to Bowles for three days of kayaking, canoeing, raft building, abseiling and bushcraft. A wonderful way to celebrate their time at Coldean with their friends, supporting each other overcoming challenges. The staff were so impressed by everyone's demonstration of our Golden Values throughout the trip that the children were awarded a Golden Flamingo Certificate!

We use necessary cookies to make our site work. We'd also like to set optional analytics cookies to help us improve it. We won't set optional cookies unless you enable them. Using this tool will set a cookie on your device to remember your preferences.

Necessary cookies enable core functionality such as security, network management, and accessibility. You may disable these by changing your browser settings, but this may affect how the website functions.